Ride the River 2016 was a great success.  This year a $9200.00 profit was raised from the Ride the River 2016 and it has been distributed to eight local FFA Chapters for use in their chapter activities.  The eight chapters that were predetermined to receive donations from the proceeds of the ride were Clifton Central, Dwight, Herscher, Iroquois West, Manteno, Peotone, River Valley and Tri Point FFA.  Each received a $1,150.00 check at the November and December CIGC meetings. 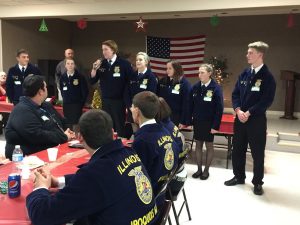 Each of the Chapters were instrumental in making 28Ride the River 2016 a reality.  Their duties varied but an example is helping with rider and tractor registration and passing out the morning coffee and rolls.  Logistical activates such as parking tractors and helping with the set up and taking down facilities for breaks and lunch.  They also were able to enjoy the ride by driving the gators at the front, middle and end of the line of tractors.  While doing this they became the watchman for the railroad tracks at Momence Island.

They did an amazing job and deserve the recognition!

Overall the history of Ride the River has been an awesome fundraising experience for the Central Illinois Green Club.  The first three Ride the River tractor drives raised $30,000 which is used for a scholarship endowment that benefits Kankakee Community College agriculture students.  Starting in 2014 the proceeds from Ride the River have gone directly to local FFA chapters to help fund their chapter activities.  Nearly $16,000.00 have been donated to these local chapters to date.